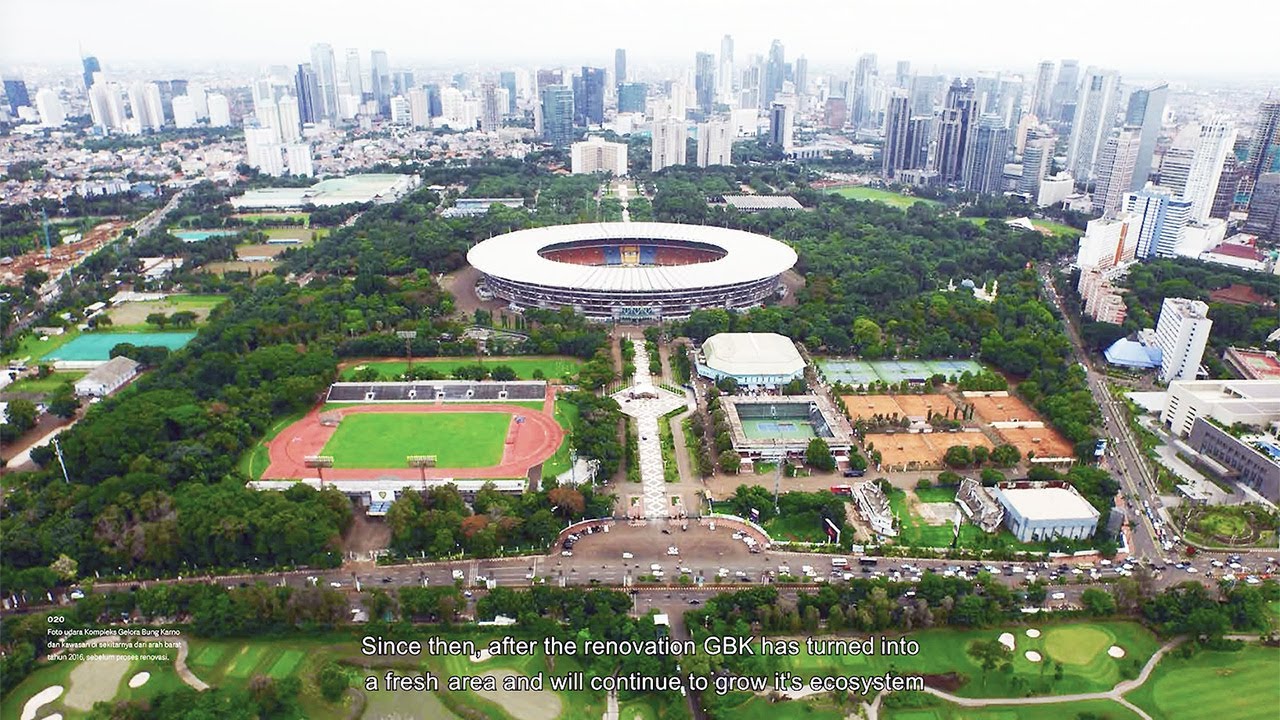 With this video for Contested Modernities, Marai Rosantina and Gregorius Yolodi from d-associates reflect on the process of the Gelora Bug Karno Sports Complex renovation and discuss the result with several people involved.
In 1958, the Asian Games Federation appointed Jakarta to host the 4th Asian Games 1962. In order to provide adequate infrastructure to hold international sports championships, the construction of a sports complex amongst other structures was mandatory. This marked the start of vital developments in Jakarta, most importantly the Gelora Bung Karno Sports Complex (GBK), which, along with other city markers, became an important part of the daily life of Jakartans. The Asian Games and the design of GBK not only significantly shaped the face of Jakarta and Indonesia as a nation, it also made an important contribution to the richness of architecture in Indonesia.

On 20 September 2014, Indonesia was announced to host the 18th Asian Games 2018, which called for the renovation of Gelora Bung Karno Sports Complex. Gregorius Yolodi and Maria Rosantina were part of the team appointed by the Association of Indonesian Architects to plan, coordinate, and execute the renovation design of the masterplan and the buildings in Gelora Bung Karno.

The renovation included a technical update of the buildings, but more importantly resulted in more public engagement with the area and an activation of the spaces. Gelora Bung Karno was transformed into a modern, urban public park in Jakarta that is actively used by Jakartans today.

The production of this video was made possible through the generous support of the Governing Mayor of Berlin, Senate Chancellery, and Goethe-Institut Jakarta.

d-associates is one of the most acclaimed architectural practices in Indonesia today. It is led by Gregorius Yolodi and Maria Rosantina. Since 2000, they have established a consistent presence on the Indonesian architectural scene and produced a considerable body of works.

They consistently develop their repertoire of sleek modernist forms and spaces using refined raw and locally-sourced materials such as reinforced concrete, bricks, wood, and metal with sensitive regard to the hot, humid tropical climate. Their effort to push their design language beyond private commissions is a notable exception among Indonesian architects.

Their recent work on significant public buildings, such as the renovation of the historic Gelora Bung Karno Sports Complex for the 18th Asian Games (2016–2018), originally commissioned by former president Sukarno for the 1962 Asian Games, brought the firm’s profile under the national spotlight.