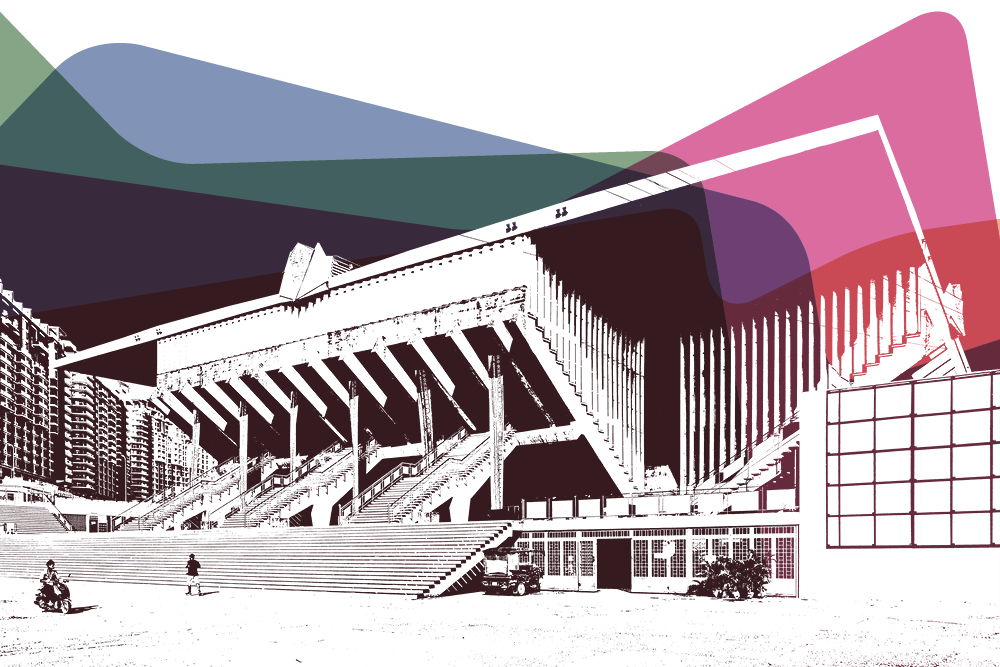 Cambodian modernism through various disciplines was already manifest during the late French colonial period – either through the colonial power or with the negotiation of Cambodian counterparts – such as in customary practices, education, literature, art and architecture. There was an insistence on departing from the previous or traditional frameworks of thinking and cultural language, into innovating new forms and expressions that were reflective of the conditions and realities of the time.

Folding Concrete presents some interwoven narratives of modernism in Cambodia through architecture and urbanism and their social and cultural histories.

Drawing from archival materials, research projects, and artworks, an exhibition presents a rich texture of architectural and cultural language that shapes and is effected by Cambodian modernism.

A series of public programmes, including talks, a tour, a workshop lab, and film screenings is also organised during the exhibition period to expand the conversation.

Updates and further information you can also find on Folding Concrete’s facebook page.

Today we will open the exhibition Folding Concrete!

The team of artistic directors of Encounters with Southeast Asian Modernism will give a short introduction to the overall project.

Guests from Jakarta and Singapore will be present too, and give previews to the SEAM Spaces in their cities.

The exhibition primarily considers the period of post-independence during the 1950s-70s, yet also extends its view back to the prior late colonial period and forward to the present time.

While architecture and urbanism are the main focus, intersections with the fields of art and visual culture are also shed light on. Drawing from archival materials, research projects, and artworks, the exhibition presents a rich texture of architectural and cultural language that shapes and is effected by Cambodian modernism.

Further contributions:
The exhibition will also give a preview to the SEAM Spaces Jakarta, Yangon and Singapore exhibitions.

Opening hours:
Wednesday to Friday 10am – 6pm
Saturday to Sunday 10am – 7pm

The lab will focus on archiving and documenting modernist architecture in Phnom Penh that has been overlooked or has already disappeared. In addition to documenting these buildings, the lab will work with a technologist to explore new ways of creating online archives.

The lab will be run by the Vann Molyvann Project and collaborators.

Working hours:
Monday to Friday from 9am – 6pm

This talk examines two distinguished projects, Olympic National Sports Complex and Bassac Riverfront Project, in Sangkum Reastr Niyum era that reflect both ideas of Cambodian modern movement and urban changes in Phnom Penh from the 1960s until present. Olympic National Sports Complex was designed by the prominent Cambodian architect Vann Molyvann and considered as the interpretation of Angkor Wat temple. Inaugurated in 1964, the sports complex hosted a number of historical events such as GANEFO Games and the visit of French President Charles de Gaulle in 1966, military parades in Khmer Rouge regime, and cultural spectacles. In connection with the sports complex, Bassac Riverfront project was designed as Sihanouk’s cultural precinct to showcase Cambodian modern culture and Sangkum Reastr Niyum’s achievements. It was the first experimental urban development project dedicated to modern living and cultural infrastructures. An international team of architects, urbanists, and engineers was brought in to assist Lu Ban Hap and Vann Molyvann, including Gerald Hanning, Vladimir Bodiansky, Robert Hansberger, Gyoji Banshoya, and Nobuo Goto.

After returning from his studies in Paris in 1959, Lu Ban Hap was appointed Head of the Housing and Town Planning Department of the Municipality of Phnom Penh and founded his own architectural firm. Although he became one of the busiest architects of the New Khmer Architecture movement, little is known about his work, and many of his buildings have been demolished in recent years, such as the iconic White Building, others are expected to be demolished soon. The lecture gives an insight into the work and the exciting life of Lu Ban Hap.

in English and Khmer

Police captain Siporak and inspector Sam Baun raid the gambling place at Kirirom owned by Prince Chantavong. This gambling place is disguised as an orchid flower shop. As soon as Prince Chantavong is detained in jail, his wife, princess Sulpra spends her time having fun with her husband’s nephew, and later with a wealthy hotelier. Prince Chantavong discovers everything after he is released from jail. But he still forgives his wife and starts a new life.

Phnom Penh at night. Three young hip-hop dancers drive a single motorbike and stop on a muddy deserted road. Nick leaves the others to look for an iPhone he heard was lost in the area. Piseth and Thy discuss their hopes and doubts, and Piseth shows his best Michael Jackson moves. They meet Leakhena, a young female street vendor whose cart is full of colors.

While much of Cambodia’s cultural heritage was eradicated through the deaths of many artists during the Khmer Rouge era, the Preah Suramarit NationalTheatre remained standing throughout the Cambodian Civil War. Ironically,it was while the theatre was undergoing repairs in 1994 that it caught fire, was heavily damaged and has never been restored.

The Burnt Theatre is a 2005 French-Cambodian docudrama directed and co-written by Rithy Panh. A blend of fact and fiction, based on the actual lives of the actors, the film depicts a troupe of actors and dancers struggling to practise their art in the burned-out shell of Cambodia’s former national theatre, the Preah Suramarit National Theatre in Phnom Penh.

The Burnt Theatre premiered at the 2005 Cannes Film Festival as an official selection in the out-of-competition main programme, and has been screened at several other film festivals.

This talk discusses various competing narratives of exhibiting modernity during Cambodia’s post-independence including the 1955 International Exposition of Phnom Penh, the American Festival 1956-57, and the display at the Exhibition Hall of Phnom Penh’s Bassac River Front during the 1960s. While Cambodia was seeking to position itself as an independent, modern state and a member of the international community, it also had to maneuver the contending cultural influences of the Cold War between the “Free World” and the Soviet bloc.