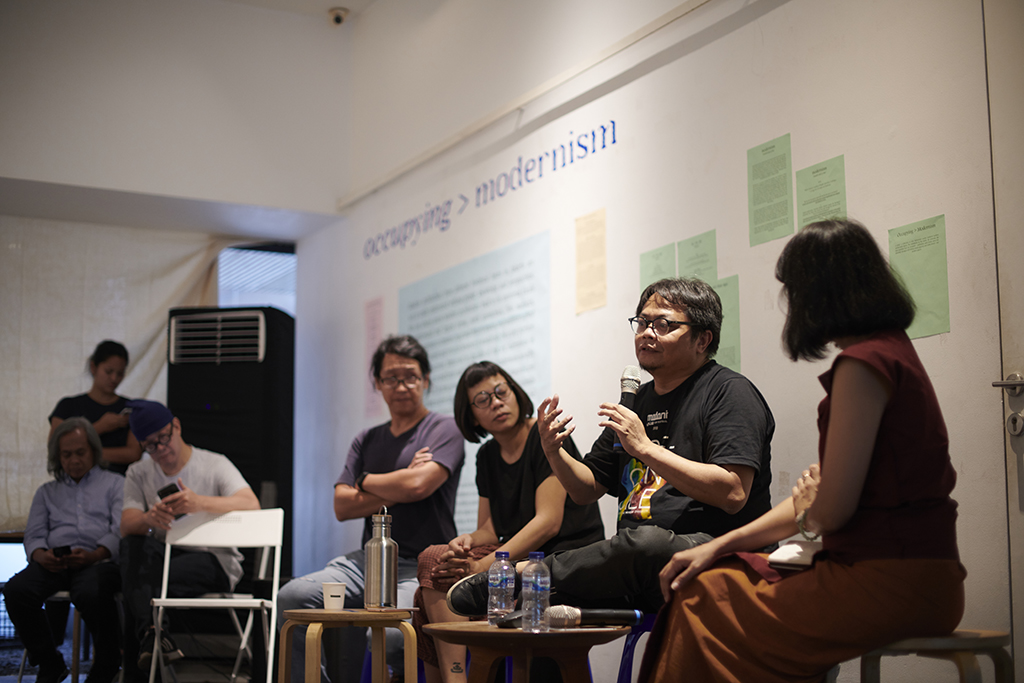 Prior to the official opening of the Occupying Modernism exhibition at Kopi Manyar, the curators organized a panel discussion entitled Disclosing Our Modern Spaces, moderated by Avianti Armand.

Setiati Sopandi, co-curator of Occupying Modernism, opened the panel with a speculation and survey of the established narratives of modern architecture in Indonesia. He put forward the central thesis that the historiography of architecture has always been formulated in dualisms: modern vs. traditional, colonial vs. non-colonial, left vs. right, urban vs. rural, national vs. foreign. This black-and-white thinking runs throughout history, as Sopandi noted in his summary of the last hundred years. Dualism was established at the latest when Dutch colonial exhibitions exoticized local construction methods. But it also took place in the struggle for independence, where colonial architecture was attacked, or further during the time of the Japanese occupation. While these dualisms subsided in the first years after independence under President Sukarno, they regained prominence under Suharto’s authoritarian regime. Today, dualisms must be overcome, and the exhibition Occupying Modernism opens up new approaches for this, as Sopandi pointed out. 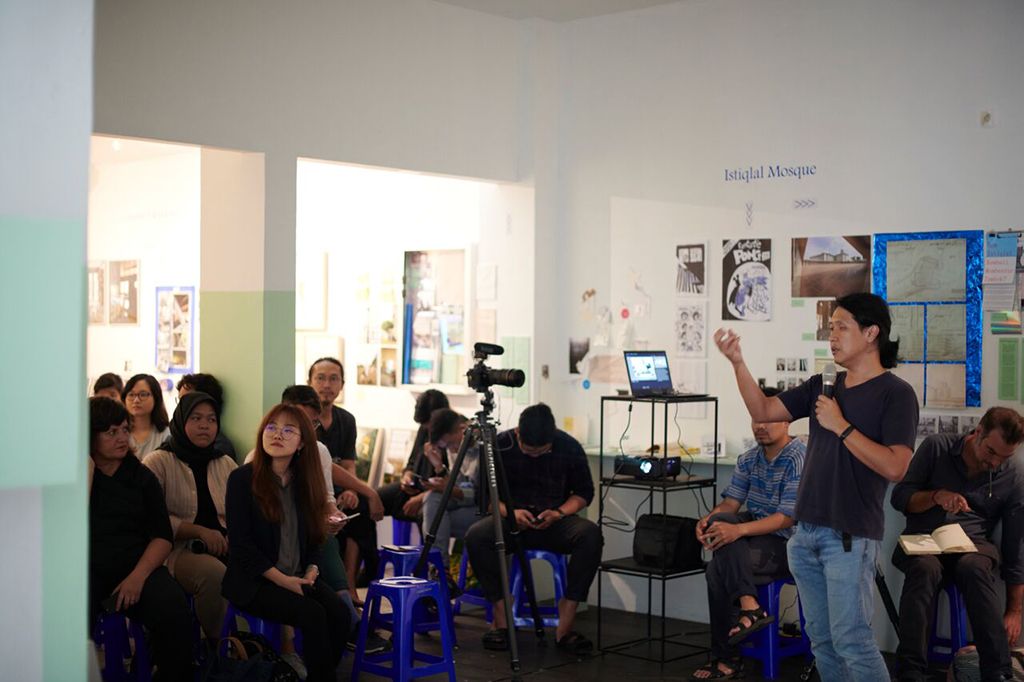 The following contribution by Hikmat Darwama created a surprising change of perspective. It dealt with the entry of modern architecture and lifestyle into society through pop culture and comics. Darwama explained that visual culture has a special role to play in Indonesia. In addition to traditional pictorial narratives, he also cited the Wyang puppet and shadow theatres, which are major formats regarding the transmission of knowledge. Since the middle of the last century, the art of comics has also increasingly established itself in Indonesia. Comics from the United States brought with them both the American lifestyle and images of extreme urbanization (e.g. the skyscraper canyons that set the scene for superheroes such as Superman, Batman, and Spiderman).

Darwana explained that in Indonesia, there are two comic traditions in particular: the Wayang comics, based on the mythological narratives of puppet theatres, and Silat comics, whose narratives are characterized by martial arts stories. Darwama presented selected examples of these publications to sketch how modern architecture, urban scenes, and Western lifestyle increasingly found their way into comics and thus shaped younger generations. However, he explained that contemporary comics increasingly focus on the characters, thereby losing their visual complexity. 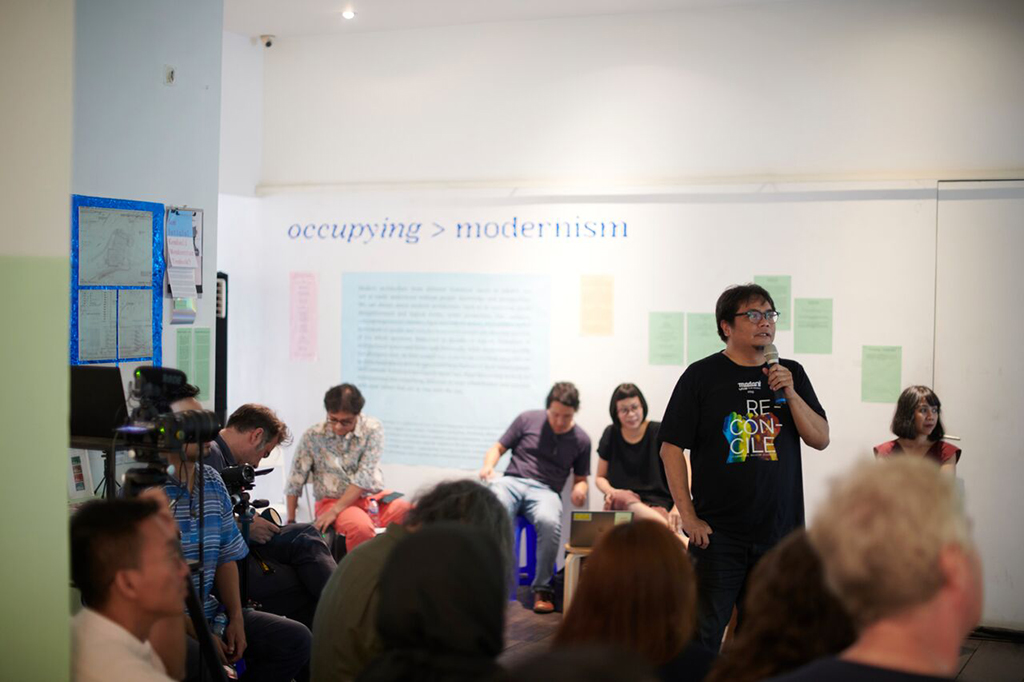 As the last speaker, Grace Samboh talked about image staging in social media. The starting point was an introduction to her exhibition FOMO/JOMO at the Rubanah Underground Hub, Jakarta. The abbreviation FOMO (fear of missing out) used in social media stands for the fear of missing a socially relevant event or a unique experience, she explained. The omnipresent nature of the smartphone has drastically increased the psychological consequences of this phenomenon. JOMO (joy of missing out) stands for the opposite. Grace Samboh placed these common terms of todays’ digital natives in a context with the work of Edhi Sunarso and addressed the manipulation of images and narratives. She looked at the National Monument and the dioramas of Sunarso, which were commissioned by the government to convey the history of Indonesia to a broad public. Understanding how historical events were manipulated in the dioramas in order to enforce political agendas can help us to understand present conditions as well. In our age of digital and constant staging in social media, the possibilities of visual manipulation have become virtually unlimited. 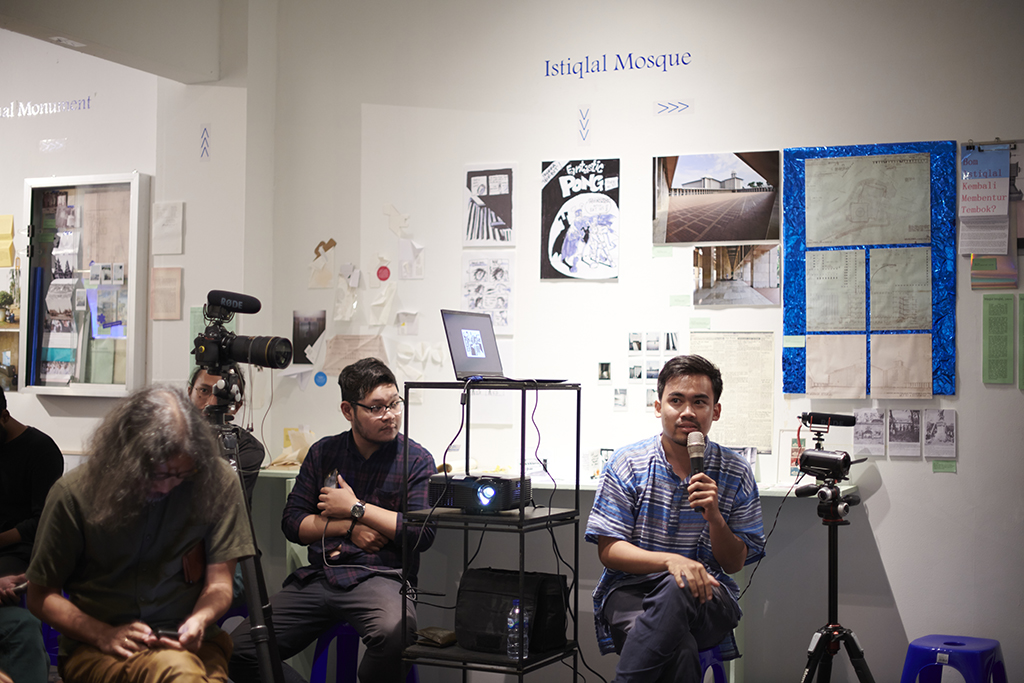 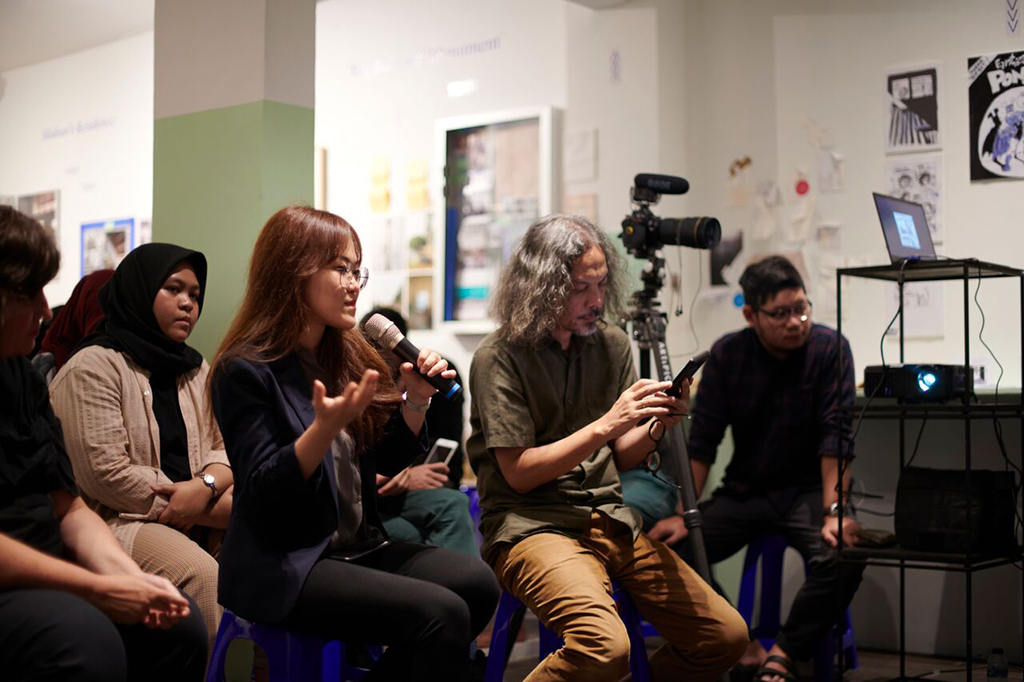