“our modern spaces as

The final tour of the programme in Jakarta started at the Hotel Indonesia Roundabout. This central hub in Jakarta is named after Hotel Indonesia (today Hotel Indonesia Kempenski), which was designed by the Danish architect Abel Sorensen together with his wife Wendy Beker in 1962. The complex was commissioned by Indonesia’s first president Sukarno on the occasion of the 1962 Asian Games, which were pivotal in the history of the young independent nation of Indonesia. The hotel is located at a large roundabout, in the middle of which is the Welcome Monument, which is also part of the comprehensive urban planning project for the Asian Games. With the luxury hotel, the Welcome Monument, and a multi-lane road axis that connects the old town and the then-newly built airport, a structural gesture of welcoming international guests to Indonesia was to be expressed.

The second sight of the tour, the Istiqlal Mosque, is also directly related to the expression of Indonesia’s liberation from the Dutch colonial power. The word “Istiqlal”, taken from Arabic, means independence. Completed in 1978, the building is the largest mosque in Southeast Asia. Accordingly, the building looks extremely monumental from the outside. Inside, despite the immense size of the prayer room, the building appears much more filigree, transparent, and inviting. This is also reflected in the atmosphere. After a warm welcome, we were invited to a selfie session in the prayer room. We were also positively surprised that there is no such strict separation between men and women in the sacral building. The two praying areas are right next to each other and separated only by a row of belt stands. Even though the majority of Indonesians are Muslims, the country is historically characterised by a great tolerance among the world religions. However, there are also repeated tensions and in recent years conservative Islam has increasingly gained power, which also has an impact on politics and many other areas of life in Indonesia.

We had already heard quite a lot about the National Monument (MONAS) in the run-up to the Jakarta programme, as it is one of the buildings examined in the exhibition Occupying Modernism and inhabits a central position in the project From, by, and for whom?. Opened in 1975, the building houses a large number of Edhi Sunarso’s dioramas, commissioned by the first Indonesian president Sukarno and later by his successor Suharto. The phallic building (design: Frederich Silaban, R.M. Soedarsono) on the centrally located Merdeka is visible from afar. To access the building, you have to walk halfway around the square and enter it through a tunnel. This way of entry is designed to increase respect for the building and its representation of the Indonesian nation. Inside, there are more than 50 dioramas designed by Edhi Suarso that tell the story of the Indonesian archipelago. As Grace Samboh’s research has shown, national historiography is manipulated by dioramas in many ways. Historical moments were sometimes deliberately distorted in order to reinforce the desired political impact and legitimacy of the government. The exhibition at Gudskul designed by Samboh as well as the audio guides developed by students within the framework of Encounters, illustrate this manipulation and offer alternative narratives that analyse selected dioramas and integrate them into both the historical political context and the contemporary social context. We could already listen to the first audio guides in a working version during our tour of the Monas and were very touched by them. The final versions will soon be made available online to a wide audience. 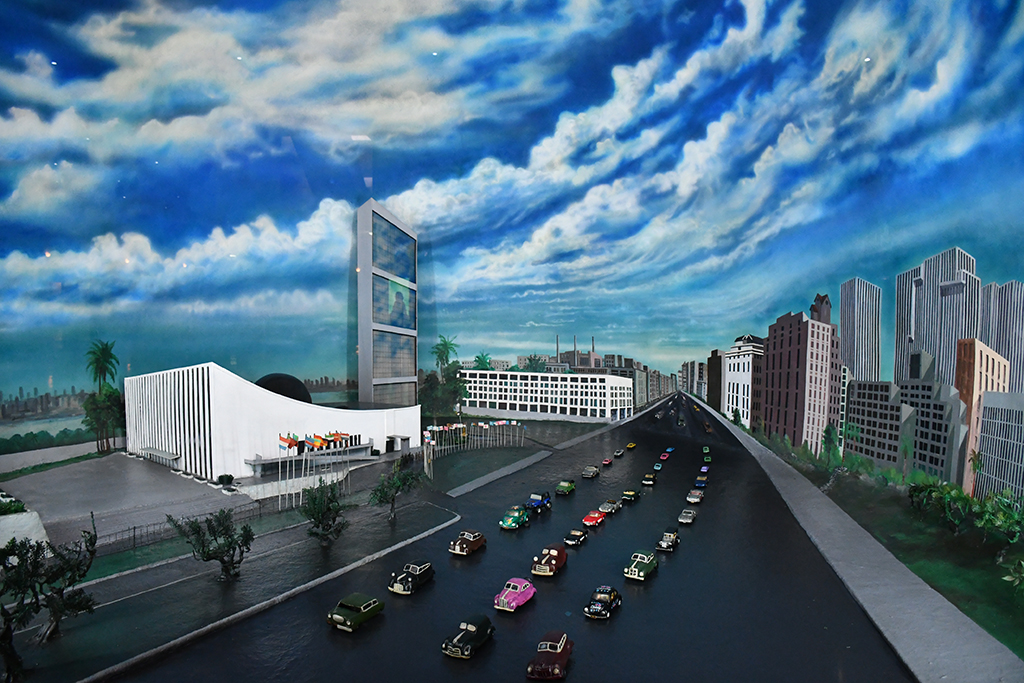 The last stop on the agenda took us to Utama Senayan Stadium (today: Gelora Bung Karno Stadium), built for the Asian Games. Designed by Friedrich Silaban and completed in 1962, the stadium originally held 100,000 seats. Since then, the sports facility has been the venue for a large number of international competitions in various disciplines. The stadium and other sports facilities in this area were extensively renovated and expanded for the Asian Games in 2018. We were lucky enough to learn first-hand about the renovation measures: The architects Gregorius Supie Yolodie and Maria Rosantina (d-associates), who were responsible for the comprehensive reconstruction of the stadium, gave us a wonderfully informative and also very personal insight. We learned about the historical significance of the stadium complex, the architectural details, and their own creative approaches to restoration and expansion. Also, the stadium management team warmly welcomed us and gave us the opportunity to enjoy a moment on the stadium lawn, where we took some photos of our delegation. After a visit to the multi-purpose hall, we moved on to the swimming pool building redesigned by Andra Matin, who added a fantastic curved ceiling construction. We enjoyed watching the bathing guests and kids jumping from the diving platform. We also found this cheerful light-heartedness in many other parts of the huge sports area, which is intensively used by the inhabitants of Jakarta for sports and walks, but also for many festivities. In the hectic bustle of Jakarta, where the omnipresence of cars, motorcycles, and their exhaust fumes are the main feature, and where is little free public space, the area around Gelora Bung Karno Stadium plays an immensely important role as a local recreation area in the megacity. 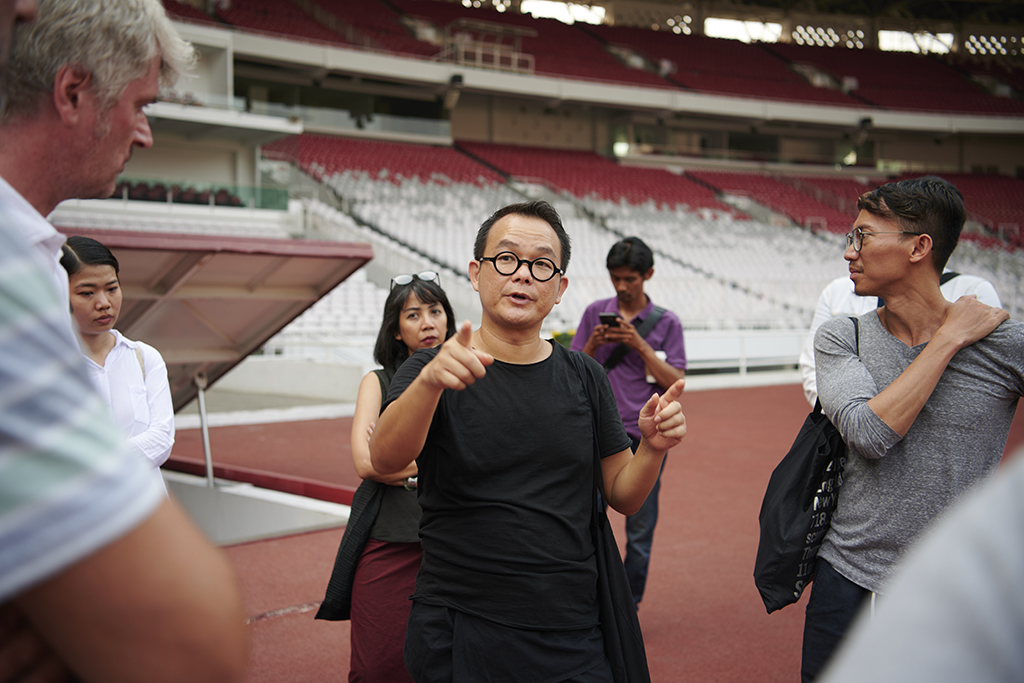 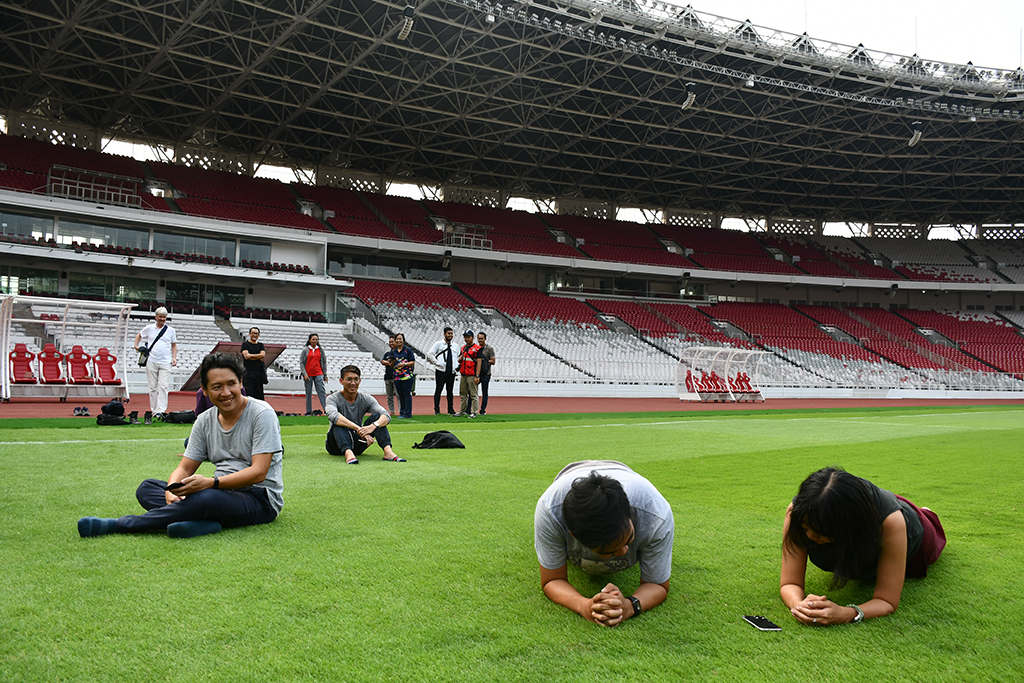