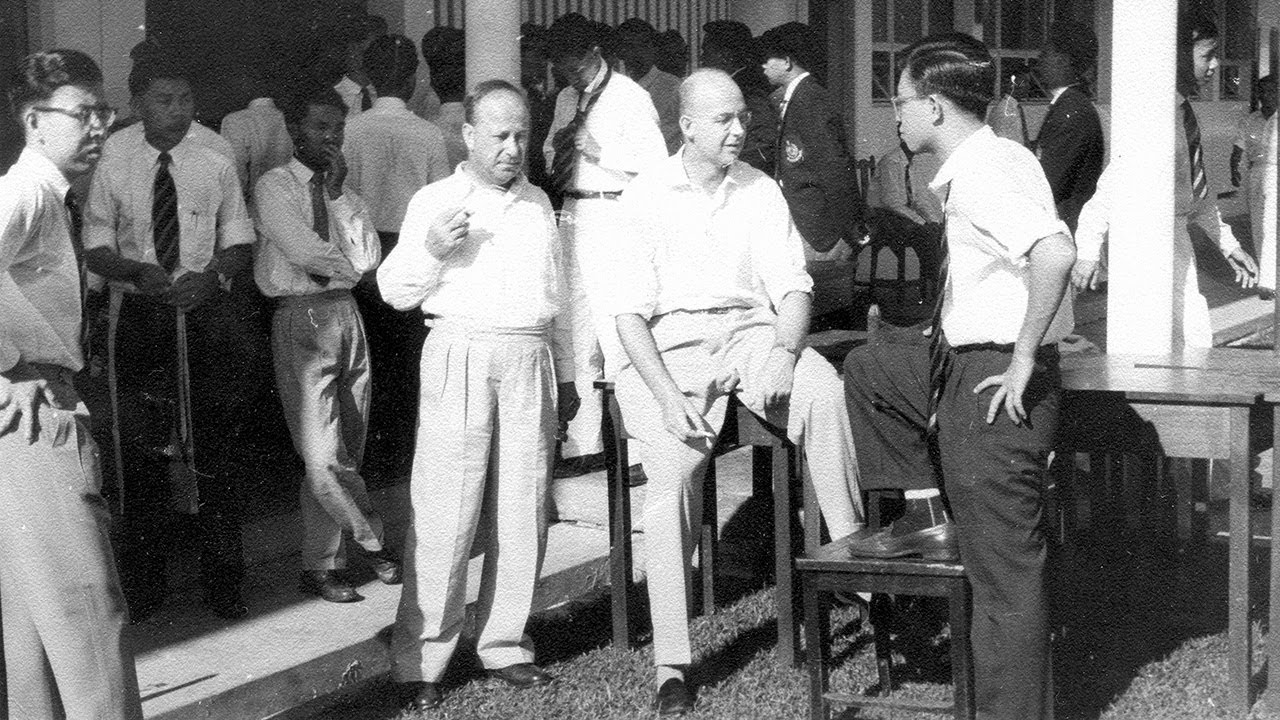 On 16 April 2021, the programme of Contested Modernities – Postcolonial Architecture in Southeast Asia started with the first of four online symposia that extend the dialogue on modernism in Southeast Asia to include Germany. In the starting symposium the discourse focused on the topic of Building Modernities and the freshly published ARCH+ issue on the project.
0:00:00 Introduction
0:07:46 Presentation of ARCH+ 243: Contested Modernities
0:23:22 Anticolonial Solidarity and Decolonial Planning in Vietnam
0:49:17 The Malayan Architect on Trial
1:09:42 An Emergent Asian Modernism
1:32.33 On transdisciplinary and transnational networks
1:50:33 Q&A
The artistic directors introduced the topics as follows:
While planners of the former colonial powers continued to work in these countries even after they became independent, young local architects, some of whom had trained in Europe, the United States, or the Soviet Union, began searching for an architectural style that, informed by their local climate and culture, would catalyse a new sense of identity. Some of these architects created informal networks that transcended national borders, and together looked for ideas to shape the city in the tropics.

Furthermore, as part of the political reorientation process taking place in these young nations, new, transnational alliances emerged, and with them, new paths of knowledge and architecture transfer. How did these international networks work? Who initiated them? Did conflicts arise during their collaboration, and if so, how were they handled? What were the geopolitical ambitions that motivated this engagement?

Sally Below welcomed the guests on behalf of the artistic directors and explained the genesis and development of Encounters with Southeast Asian Modernism and the concerns and programme of Contested Modernities.

The task has not yet been solved

ARCH+ Editor-in-Chief Anh-Linh Ngo who moderated the symposium then introduced the specific issues of the day and presented the contents of the current ARCH+ edition. Issue 243 of ARCH+, Contested Modernities – Postkoloniale Architektur und Identitätskonstruktion in Südostasien was conceived by Sally Below, Moritz Henning, and Eduard Kögel as guest editors together with ARCH+ editor Christian Hiller and realized in close cooperation with the ARCH+ editorial team. Anh-Linh Ngo emphasized that the discussions on the modernities in Southeast Asia once again make it clear that overcoming the tensions between universalist claims of modernity and the specific social contexts is a task that has not yet been solved.

Christina Schwenkel, Professor at the Department of Anthropology, University of California, Riverside works in the fields of cold war cultural studies, critical urban theory, decolonization, affect theory, and new materialisms. Her lecture Anticolonial Solidarity and Decolonial Planning in Vietnam gave a vivid insight into the complex relations between the German Democratic Republic and Vietnam using the example of the construction of the city of Vinh.

The Malayan Architect on Trial

Eduard Kögel, lecturer, researcher and part of the curatorial team used in his lecture Julius Posener and Lim Chong Keat: The Malayan Architect on Trial a public exchange of letters in various architectural magazines between the German architect Julius Posener, who came to the Technical College in Kuala Lumpur as founding director for five years in 1956, and the young Malay architect Lim Chong Keat to show the respective perspectives on architecture and to demonstrate that it was less a question of discussing modernism than self-determination and equal opportunities.

Wee H. Koon, founding partner of SKEW Collaborative, architect, researcher and educator from Hong Kong, studies on Modernism in Asia and outlined in his lecture An Emergent Asian Modernism the emergence of networks between architects in the post-independence era, distinguishing between professional collaboration and think tank formations. He gave a pictorial insight in the relations between key architects of the region and their exchange of ideas and approaches.

Against the backdrop of the previous lectures farid rakun, ruangrupa/Gudskul, and Anh-Linh Ngo discussed in their contribution transdisciplinary and transnational networks and difference of knowledge exchange between art and architecture. In the final discussion, all contributors answered in-depth questions from the moderator Anh-Linh Ngo about their research.